A major controversy has erupted in Los Angeles about the Los Angeles Police Department (LAPD) spying on and criminalizing political protest against the Trump/Pence fascist regime.
This has now broken into the editorial section of the LA Times with the lead editorial on the LAPD infiltrating Refuse Fascism, spying on and recording constitutionally protected political organizing and speech. There is a long and sordid history of LAPD political spying and “information gathering” aimed at progressive and radical movements, against police critics inside of city government, and even on the political establishment. In 1975 the LAPD was ordered to destroy files on 55,000 people. Instead they just hid them, and even leaked them to fascist organizers, which was uncovered through a series of lawsuits through the ’80s. This is what the LA Times editorial calls the “LAPD's surveillance hall of shame.” Through court cases and a lot of struggle, there have been consent decrees, reorganization and federal court rulings aimed at “reforming” the police. The LA Times editorial writes, “it is not clear why the department has to keep relearning the same lesson: Snooping on the public in order to gather intelligence is off-limits unless authorities have a reasonable belief that there is a crime afoot. Without a credible tip or other evidence, monitoring a conversation or a meeting amounts to a fishing expedition at best. When directed at people of a particular political leaning, race or creed, it’s unlawful harassment.”
This illegal spying only came to light because of the determined and heroic resistance of the members of Refuse Fascism and the Revolution Club who were arrested and dragged into court, facing illegitimate criminal charges that could land them in jail for up to three years. They were arrested in protests aimed at sounding the alarm and calling people into the streets to stop this fascist nightmare. For more on these cases, and the upcoming trials in August and September, go here.
Word of this needs to spread further—exposing what the LAPD has done and demanding the charges in three trials, currently set for August and September, be dropped. Things people can and should do:

LAPD Chief Pig Goes on the Attack with Slander and Lies

Last Tuesday, July 23, at the LA Police Commission, when questioned as to who from the Police Commission approved this spying, LAPD Chief Moore went on the attack, spreading slander and lies about Refuse Fascism. He claimed that “members that identified themselves as being within this group had traveled to other parts of the country, and that in other parts of the country, there had been criminal acts including vandalism, assault with a deadly weapon or arson...” This would be laughable if it weren't so dangerous. You went somewhere, while you were there some people mayhave done something illegal, therefore you should be investigated. This was not just an attempt to justify the LAPD’s unconstitutional spying, but a disinformation campaign—a deliberate spreading of false information to try to justify, and deflect from the fact that legal, protected speech and organizing is being targeted by the LAPD (and possibly higher), and to justify more of the same.
This is all the more dangerous against a backdrop of a rapidly consolidating fascist America where protest and dissent are being criminalized, where Trump is calling for locking up his political opponents, vilifying the press and mobilizing and whipping up a fascist social base at Ku Klux Klan style rallies… a time of concentration camps and the looming possibility of war turning to nuclear war.
It was these dangers—the existential threat represented by the Trump/Pence regime—that these protesters were warning of. In the fall of 2017, they recognized that, as Refuse Fascism said, “Only the determined struggle of millions of people acting together with courage and conviction can drive this regime from power.” Not elections, not investigations, not petitions, not lobbying, not posting your outrage on social media and staying home. This is more true now than ever. They broke with the normal routine of protest-as-usual—disrupting traffic on the 101 Freeway and disrupting the polite presentation at UCLA given by the fascist Steve Mnuchin—calling for millions in the streets.

The Democratic Party: Greasing the Skids for Fascism

As these trials reveal, it is this kind of protest that the Democratic Party machinery in the DA’s office (and perhaps higher) is working overtime to suppress and contain. It is likely that this spying was known and approved high up in offices currently held by the Democratic Party in the city of Los Angeles and in the state of California. Why is it that Mike Feuer’s office spent almost a year building these cases—compiling 57 charges against 11 people? Why is he now doubling down to retry these cases?
It’s because they represent the same capitalist system—and they are seeking to resolve the big differences they have with the whole fascist direction Trump and the Republicans are fighting to bolt into place—on the basis of their interests in preserving that system. The Democrats’ job is to make people think their party is at least responsive to their interests and to think that they have a stake in a capitalist democracy that claims to represent “the will of the people.” The Democrats have a shared interest in the plunder of the world and in an America First competition with their imperialist rivals. They have a shared interest in draconian measures of controlling immigration which they euphemistically call “border security,” when their own system, with its wars, invasions, coups and economic domination, has devastated the countries to the south and created the mass migration they consider an immigration crisis, to begin with. The leadership of the Democratic Party is opposing impeachment because it would “tear the country apart,” which means they find it preferable to live with the horrors this regime is bringing down on the heads of people here and all around the world. This is a party that is more afraid of the people getting out of bounds of the official channels they want people confined within and demobilized by than they are of the order of fascism.
Bob Avakian (BA), in making the case for Refuse Fascism, called on people to get out beyond the confines of this kind of politics, to confront that this is fascism, that it comes out of the origins and history of America and to break with the American chauvinism that makes people think “fascism can’t happen here.” To stop thinking like an American and to start thinking about humanity.
Refuse Fascism is right when it calls for massive non-violent mobilization “growing from thousands to hundreds of thousands and eventually millions. Our actions will reflect the values of respect for all of humanity and the world we want—in stark contrast to the hate and bigotry of the Trump/Pence fascist regime. The whole world will take heart. This will shake millions awake, with many losing their adjustment to life under this regime. The international credibility of the regime will be undermined. A determined struggle that doesn’t yield and won’t be provoked can create a serious political crisis. Those in power who are themselves now under attack by the regime but conciliating with it would be compelled to respond to our struggle from below, leading to a situation where this illegitimate regime is removed from power.”
There is still time, but not much time, for people to mobilize in their millions to demand: The Trump/Pence Regime Must Go! Just as the people in Puerto Rico have done and following examples in Hong Kong, Sudan, Armenia and more.

What Kind of a System IS This?!

Several defendants in these cases are part of the National Get Organized for an ACTUAL Revolution Tour: seeing the need to prevent the consolidation of fascism as part of making revolution to bring a whole better future into being. Alex Hernandez, one of the defendants in the Freeway 9 case who is a part of the National Revolution Tour, said, “What kind of system sends its armed forces of repression to spy on and criminalize people who are standing up for the interests of humanity while the regime is torturing immigrants at the border and threatening to murder 10 million Afghan people?! This system is illegitimate and needs to be overthrown at the soonest possible time.”
The National Revolution Tour is working to do that, putting before society the need for revolution, the possibility of revolution and the leadership for revolution in BA. There is a solution to this madness. The National Tour is setting out to organize thousands of people into the revolution over the course of a year. It is involving people in the strategy for revolution, spreading the Constitution for the New Socialist Republic in North America written by BA and working with people to solve the problems of the revolution… including very immediately why people aren’t in the streets in their millions acting now to demand: The Trump/Pence Regime Must Go!
Alex, in talking about why he got on the 101 Freeway in 2017 said, “When I found out about BA, and learned more deeply about the horrors happening to people all around the world, when I learned about the possibility for revolution, I said: I want to dedicate my life to that, to the emancipation of humanity. I decided I couldn't stand aside. When Trump came to power, threatening fire and fury against North Korea, threatening a fascist America, I decided I couldn’t stand aside. Now—with all that this regime has done in the last two and a half years and is threatening to do—that question is really before everyone.” 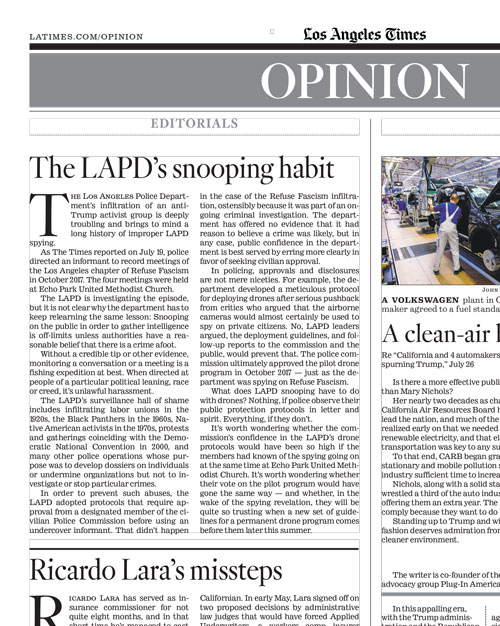 "Order or Justice?"
A Clip from a Talk by Bob Avakian, The Trump/Pence Regime Must Go! In the Name of Humanity, We REFUSE to Accept a Fascist America—A Better World IS Possible
From Why We Need An Actual Revolution And How We Can Really Make Revolution:
Bob Avakian On Revolution And The Fight Against Fascism
Share widely on social media
Download this clip
Members of Refuse Fascism and the Revolution Club were arrested in protests aimed at sounding the alarm and calling people into the streets to stop this fascist nightmare. For more on these cases, and the upcoming trials in August and September, go here.
RefuseFascism.org is a movement of people coming from diverse perspectives, united in the recognition that the Trump/Pence Regime poses a catastrophic danger to humanity and the planet, and that it is our responsibility to drive them from power through non-violent protests that grow every day until our demand is met.
Go to RefuseFascism.org to learn more and find out how to participate.


Revcom.us needs to raise thousands each month to meet basic expenses, extend our reach, and fully be the online hub of the emerging movement for revolution.  By the end of August, we need $1000 in new sustainer funds per month. We invite you to become a sustainer, or to increase the amount you are already sustaining at this pivotal moment.

You’ve read this article, now think about the crucial role revcom.us plays.  White supremacy and fascism are running rampant, and women’s basic rights are being ripped away.  America threatens wars on Venezuela and Iran, as it terrorizes immigrant families and wantonly plunders our environment—imperiling humanity’s very future.  At revcom.us you learn where these horrors come from, how they can be ended through an actual revolution, and how people are working now toward revolution.  You can find, engage and spread the work of Bob Avakian, the leader of this revolution, the architect of the new communism, and author of a concrete blueprint for a new society moving toward full emancipation. So become part of fighting for humanity’s future: sustain or donate now.
Eingestellt von Punxatan um 05:22