15 Days That Drove a Hated Leader from Power

I remember watching in awe when a series of mass demonstrations, spurred by the rising cost of living and other economic woes, ousted President Omar al-Bashir of Sudan this year. I could not imagine that happening in Puerto Rico. I had grown up thinking that Puerto Ricans simply accepted their lot in life. Sure, university students or union groups broke out into protest from time to time, but eventually those protests would fade out.
—Laura Oliviera Robles, a young Puerto Rican freelance journalist, New York Times, July 25, 2019

Over a bit more than two weeks, starting with a protest of dozens of activists, hundreds of thousands took to the streets in daily (and nightly) protests, often defying savage police repression, and giving birth to a movement that is determined to transform the intolerable conditions endured by the roughly 3.5 million Puerto Rican people, and forcing the resignation of the hated governor.
How did this happen?
It’s not possible to understand this without starting from the most basic reality of Puerto Rico—that for 120 years it has been a colony of the United States, that its whole economy has been dominated and distorted to serve the accumulation of wealth by the U.S., and that its government—including its notoriously brutal, corrupt, and repressive police force—was set up by the U.S. and exists to serve its control of the Puerto Rican people, while a thin strata of “elite” Puerto Ricans operate this machinery and collect their “slice” of the profit.
This reality has made a decent life in Puerto Rico nearly impossible, forcing millions to leave their homeland seeking opportunities in the U.S. It has led to a devastating economic crisis that is crippling the hopes and dreams of millions. And this was all capped off when the U.S. government virtually abandoned Puerto Rico in the wake of hurricanes Irma and Maria, leading to thousands of unnecessary deaths and intolerable suffering for millions. All this in turn has greatly aggravated other miseries, including violence among the people, and especially domestic violence against women.
Yet and still, it seemed that, as the journalist quoted above put it, there was little sustained protest and it appeared that “Puerto Ricans simply accepted their lot in life.”
And then...
On Tuesday, July 9, Sandra Rodríguez Cotto, a local blogger, leaked a small number of chats among Gov. Ricardo Rosselló and his inner circle in which they made anti-gay, misogynistic, and other offensive comments about Puerto Ricans. This was followed on July 10 by the arrest of Rosselló’s secretary of education and other high officials on corruption charges.
The convergence of these two things began to tear away the facade of government legitimacy, so much so that Rosselló, in the middle of a European cruise, left his family behind and flew home to issue apologies and to hold morning-to-night meetings with high-level officials of his New Progressive Party (NPP). (The NPP, which advocates statehood for Puerto Rico, controls all three branches of the government there.)
Even at that early stage, some NPP leaders thought the situation was untenable, and that the chats “might drag down the whole party on the island.”
On Thursday, July 11, activists—100 at most—held the first protest at La Fortaleza (the governor’s mansion) calling for Rosselló to resign.
On Saturday, July 13, all 889 pages of the secret chats were released by Puerto Rico’s Center for Investigative Journalism, a torrent of anti-woman, anti-gay “jokes,” as well as discussion of unleashing the police and other violence against their political foes, and jokes about people killed in the hurricane. As Professor Marisol LeBrón of the University of Texas wrote, “What the chat makes clear is that the current political arrangement cannot provide [a decent] future for Puerto Ricans. That’s why people are taking to the streets—not only to demand Rosselló’s resignation, but also to clearly express that the current political situation is unacceptable.”
Large-scale protests began to converge daily—and nightly—on La Fortaleza, some numbering in the tens of thousands.
The same day, Rosselló’s secretary of state resigned, proclaiming it his “moral obligation.”
On Sunday, July 14, Rosselló went to an evangelical church to seek “public contrition,” and to shore up the support of Christian conservatives, an important part of NPP’s base.
Mass demonstrations against Rosselló continued to grow.
On Monday, July 15, protests again laid siege to the governor’s mansion. Though things were peaceful for many hours, after dark the police suddenly declared the huge crowd illegal and ordered it to disperse, then quickly attacked with tear gas, pepper spray, and rubber bullets. Apparently they hoped that the peaceful movement could be broken like this; one cop even boasted (in an ugly play on the protesters’ slogan that “we are more and we are unafraid,” that “Y la calle limpiesita y eso que eran más y no tenían miedo, se les olvidó que nosotros somos menos pero tenemos mucho gas” (“And the street is clear and those that were more and had no fear, they forgot that we’re fewer but we have a lot of gas.”—emphasis added)
But instead of breaking the resistance, these attacks further delegitimized the state and led to a mushrooming of protest, which involved a combination of well-organized major protests, (often called by political forces supporting independence for Puerto Rico) with a phenomenon of “autoconvocados”—self-organized protests by individuals, small groups, etc. that could involve mass readings of the constitution, singing, yoga, or many other expressions. These autoconvocados drew in more people and gave much greater breadth, and more of a sense that “El Pueblo” was on one side and the illegitimate government on the other.
On Wednesday, July 17, tens of thousands joined a march led by popular Puerto Rican celebrities like Bad Bunny, Residente, and Ricky Martin. And again on Thursday and Friday demonstrators surrounded the governor’s mansion.
On Saturday night, July 20, the people at the mansion were again attacked by the police; street battles went deep into the night with some journalists reporting that Old San Juan looked like “a war zone.”
Support in the ruling class was collapsing. A July 20 article in the Miami Herald reveals why:

If the effort doesn’t lead to [Rosselló’s] ouster, some say, it may serve as confirmation of an increasingly widespread fear that ordinary Puerto Ricans have little to no control over their political and economic future....

All the allegations—and especially the chat—revealed the suspicions of many of us that we hail from a country of two realities... One is a powerful political class that controls every sphere of power, that does anything they want without any fear of the repercussions. The other one is of a social class that feels stuck and hopeless, that is now invigorated by the fact that they have nothing to lose, politically and socially, except for dignity and respect. This situation has touched a collective nerve that I don’t think will be emancipated until [Rosselló] resigns.

Yet in spite of his loss of legitimacy among the people and lack of ruling class support, on Sunday, July 21, Rosselló announced he would not resign (though he did promise not to run again).
This further infuriated the masses, but also posed a challenge. A young woman who had returned from the mainland to join the protests said:

Eventually we are going to get tired, and that exhaustion will consume us, and that’s when we will have to decide if we stop or we go there [to Fortaleza] even if we have to inflate a mattress and sleep in San Juan. But we are going to have to do it, because we are now the ones who will decide what is going to happen here.

This is the spirit that prevailed, and on Monday, July 22, hundreds of thousands—and a very broad spectrum of Puerto Ricans—turned out in pouring rain, seizing a major highway, and again, often facing off against hostile police, adamant that Rosselló must go. The same young woman explained it this way:

I realized this island is a treasure, and we all know it. So we’ve risen, we’ve awakened and we’re here because we’re not going to abandon our island. We’re not going to leave it and we’re going to defend it like it’s the most precious thing we have.

Finally it was clear there was no way forward for Rosselló. Though he stalled another couple of days, on Wednesday, July 24—close to midnight—he announced he would resign as of August 2.
The streets of San Juan erupted in jubilation!
Rosselló’s resignation is a great victory—the leaking of the chats as well as the arrests of corrupt officials opened a window on the oppressive nature of the regime, and by taking determined action—starting with only a few people—activists and broad masses were able to deliver a stunning repudiation of the way they have been treated and mistreated by the whole political setup in Puerto Rico.
The path forward out of the misery and oppression still needs to be carved, and a vanguard revolutionary party formed. But this struggle has enabled people in Puerto Rico—and all over—to dream of new possibilities, for the present and the future.
¡Adelante! 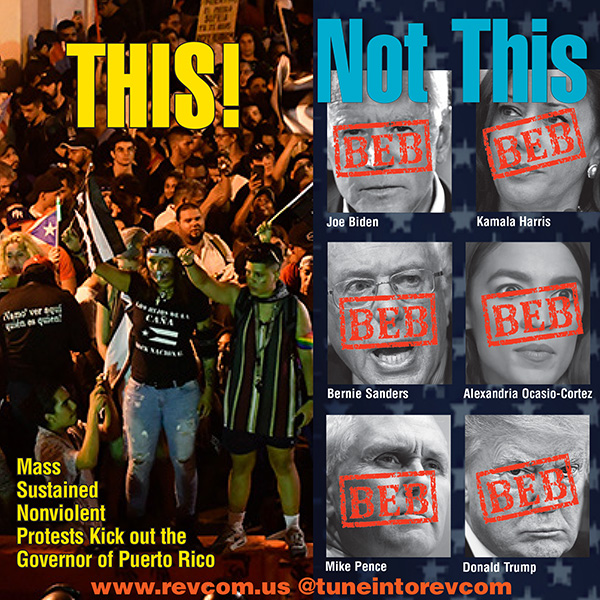 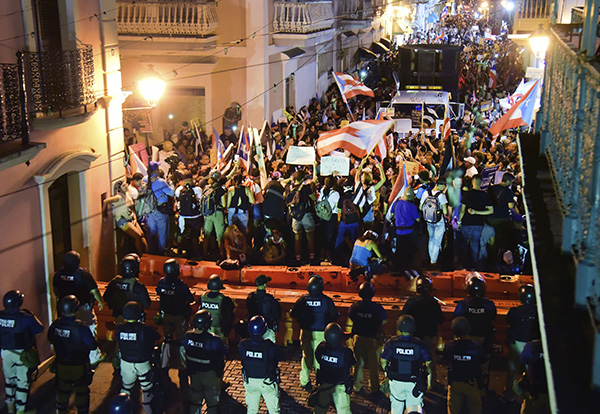 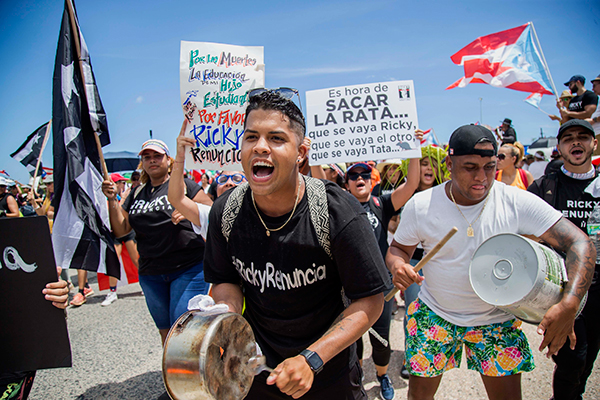 Finally, it was clear there was no way forward for Rosselló. He stalled another couple of days, announcing on July 24 that he would resign as of August 2. Photo: AP
See Also:
Puerto Rico: 120 Years of Imperialist Exploitation and Oppression
PROMESA: Imperialist Vultures Descend on Puerto Rico

Read more
See all the articles in this series. 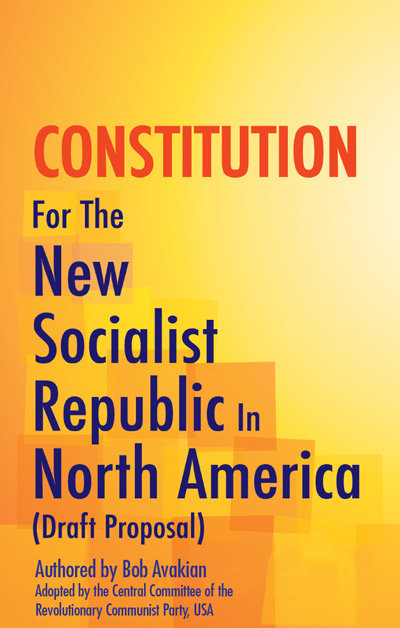 
Revcom.us needs to raise thousands each month to meet basic expenses, extend our reach, and fully be the online hub of the emerging movement for revolution.  By the end of August, we need $1000 in new sustainer funds per month. We invite you to become a sustainer, or to increase the amount you are already sustaining at this pivotal moment.

You’ve read this article, now think about the crucial role revcom.us plays.  White supremacy and fascism are running rampant, and women’s basic rights are being ripped away.  America threatens wars on Venezuela and Iran, as it terrorizes immigrant families and wantonly plunders our environment—imperiling humanity’s very future.  At revcom.us you learn where these horrors come from, how they can be ended through an actual revolution, and how people are working now toward revolution.  You can find, engage and spread the work of Bob Avakian, the leader of this revolution, the architect of the new communism, and author of a concrete blueprint for a new society moving toward full emancipation. So become part of fighting for humanity’s future: sustain or donate now.
Eingestellt von Punxatan um 05:22